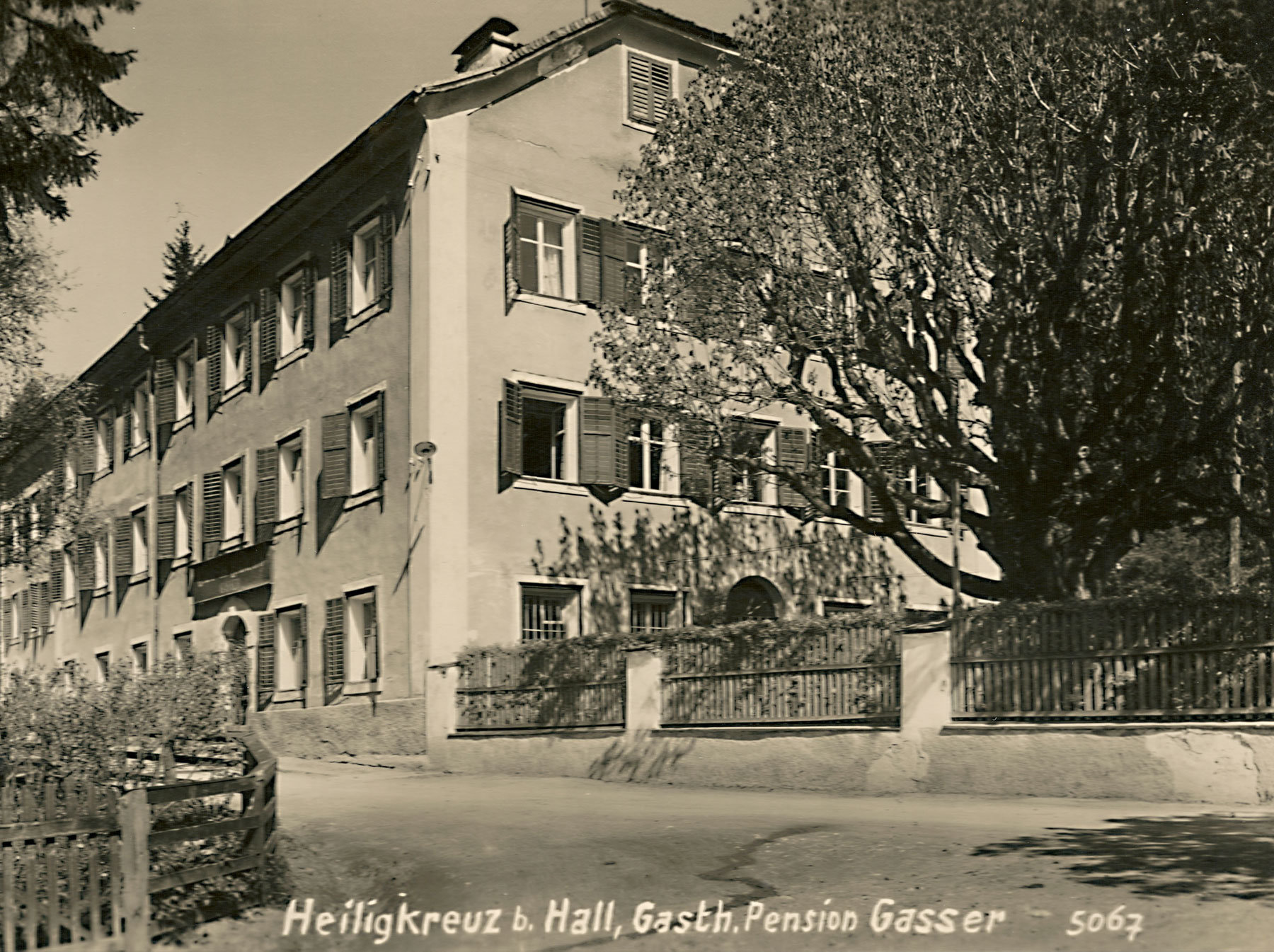 Your 4 star hotel family-run in the 3rd generation 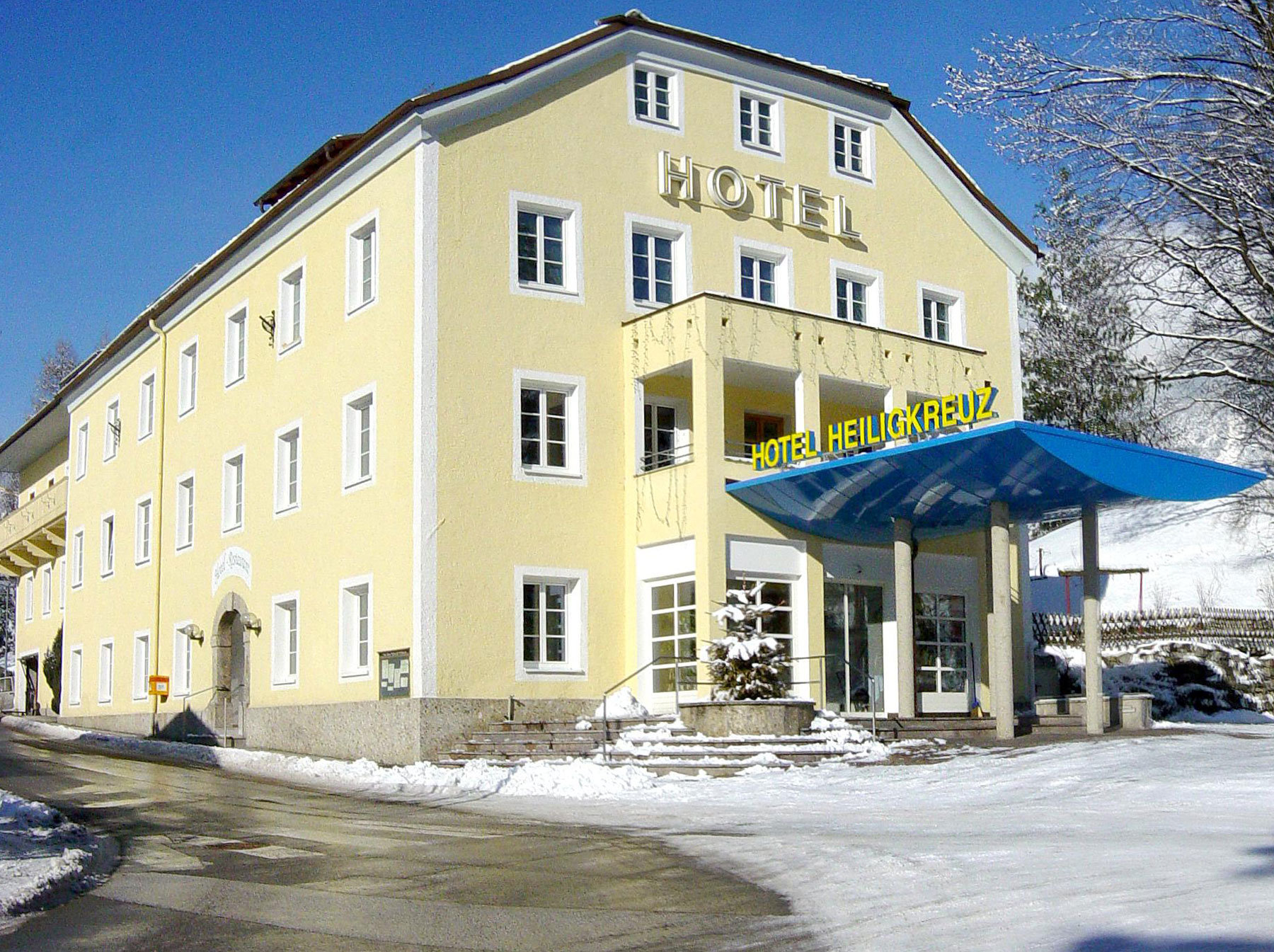 We, the Eisendle-Corazza family, have been running the former Badhotel Heiligkreuz (spa hotel holy cross) in the 3rd generation since 1954. 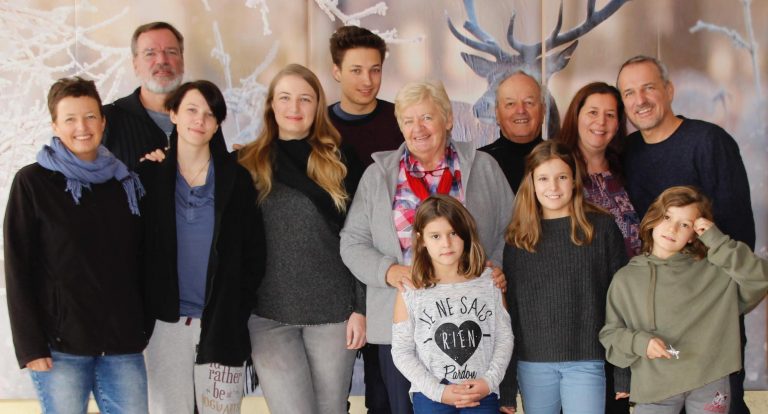 The foundation walls of this time-honoured house have been standing for centuries. 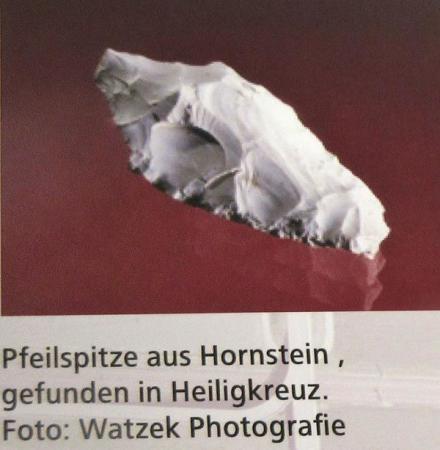 The district of holy cross, on the former bank of the alluvial area of the Inn River, was inhabited thousands of years ago and used as a camp and dwelling place. One of the oldest relics in Hall and the surrounding area was found in the garden behind the hotel – a Stone Age arrowhead and a blade scraper from the late Neolithic around 2500 BC.

In the 13th century the village was mentioned for the first time. “Gampas”, today’s Holy Cross, due to its favourable location, was settled very early by a Germanic tribe of Bavarians.

The following Romanesque settlement in the early Middle Ages is evidenced by the typical, partly still existing field divisions. The word “Gampas” (from the Romanic “campu” field) also comes from them.

The name Heiligkreuz is derived from an ancient legend. In the Haller Au a crucifix was washed up and salvaged. The cross was lifted and worshipped in Gampas. 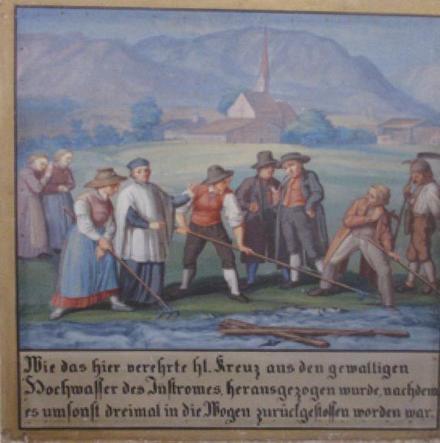 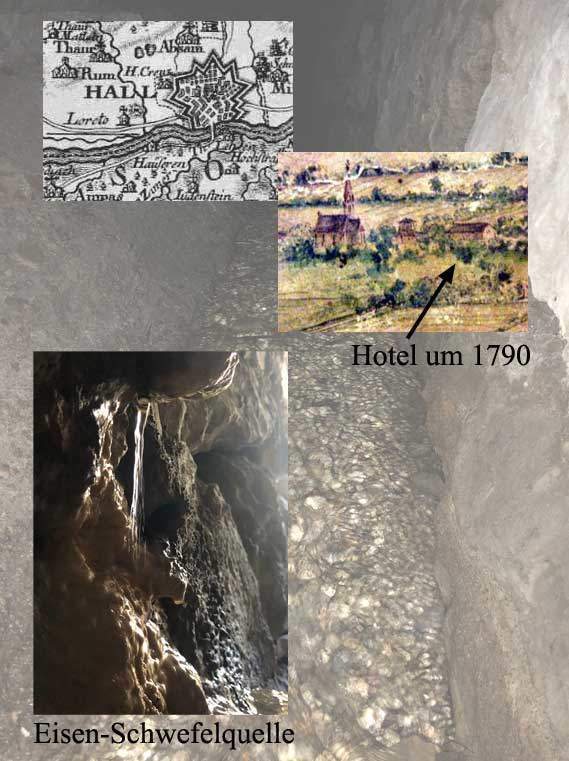 Not much younger is the building of the Hotel Heiligkreuz. It was built next to a healing spring in Gampas (“ad fontem in Gampas”), which was first mentioned in 1342. There is an invoice in the Tyrolean Landesmuseum Ferdinandeum about the delivery of the healing water to the court of Meinhard, Count of Tyrol, from the year 1300. Eleonora of Scotland (1433-1480), wife of Duke Sigmunds, spent several spa stays in Heiligkreuz. Dr. Joseph Hirn (at the time of Archduke Ferdinand II of Tyrol) wrote: “The citizens of Innsbruck and Hall moved to Heiligkreuz, whose water was also delivered to Ferdinand’s court for bathing use. Anna Welser, mother of Philippine Welser, who fell ill with a stomach complaint in 1571, is said to have gone to Heiligkreuz to bathe there for two to three hours a day. “The bath house has a pleasant location at the Raine of Heiligkreuz, is solidly built, offers a lot of space, good service and supply for bath and summer guests.”

In 1837 a second healing spring was discovered and analysed – the well-known magnesium-rich one and one with iron-containing sulphur water. A certain Mr. J. Dellacher, a famous pharmacist and chemist from Innsbruck, had subjected the springs to a chemical examination (sulphuric and hydrochloric salts, iron oxide, carbonic acid). Around 1834 Severin and Therese Ruef, née Prantl, the official blacksmith of Absam and his wife, bought the estate. In newspaper advertisements he advertised the newly discovered sulphur spring, the baths with medicinal water and brine, the good hospitality in the new extension, as well as the accommodation of the equipment. In 1861 the Gasser Georg family bought the “Solbad und Pension Gasser”, as it was called at that time. The estate certainly had the largest area at that time. First Georg, then his son Vinzenz Gasser ran the spa, Vinzenz was also K.&K. He was a notary in Hall and Chairman of the Reich Council and had hired tenants for the economy. 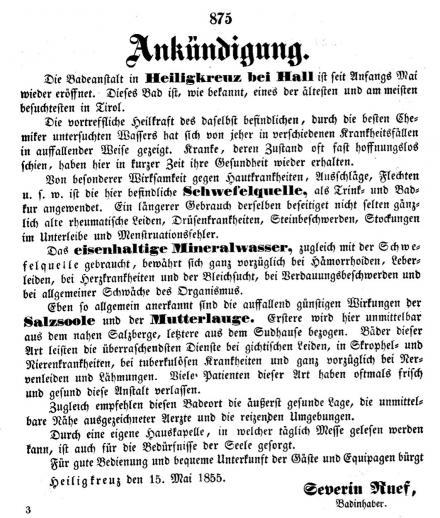 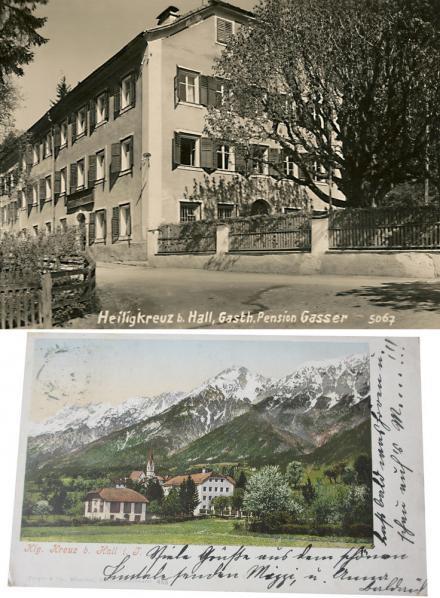 Later, when salt was mined in the Halltal valley, it was possible to bathe in medicinal brine in the “Badhotel”, as the house was called (and is still often called today). After several sales attempts after World War II, the Gasser family handed over the hotel with the northern and eastern grounds to the lawyer Dr. Gaisböck. After the end of World War II and the sale, the municipality of Hall confiscated the hotel and accommodated the French crew, who were stationed there for six years. When the former tenant Mrs. Aigner took over the house again after her departure, she described it as literally “dirty and run-down”. Everything of value and use had been taken away or destroyed. There was not much left except for the foundation walls. Due to the long-standing ban and the absence of guests, a large loan for the restoration work and an almost cancelled 1952 season, Mrs. Aigner became insolvent in 1954.

The sale to the SOS Children’s Village failed and shortly before a forced sale Julie and Josef Eisendle, our grandparents, bought the house on 10 March 1955. Unfortunately, Mrs. Aigner’s debts still weighed on the building to the tune of one third of the purchase price (finance, house loans, debts for goods and suppliers,…), of which Julie and Josef knew nothing. The plumber, who had not been paid, came and dismantled all the radiators. There were also legal disputes, as Sophie Aigner was of the opinion that she herself was a co-owner of the building and the inventory. When Julie Eisendle took over the hotel, only the ground floor and the 1st floor were habitable, the 2nd and 3rd floors were attics. In the western part there was a second wooden staircase, there were practically no functioning sanitary facilities and no heating. In addition, there were repeated demands from various suppliers of Sophie Aigner, who had to live at the subsistence level because of official seizures. Desolate times…. 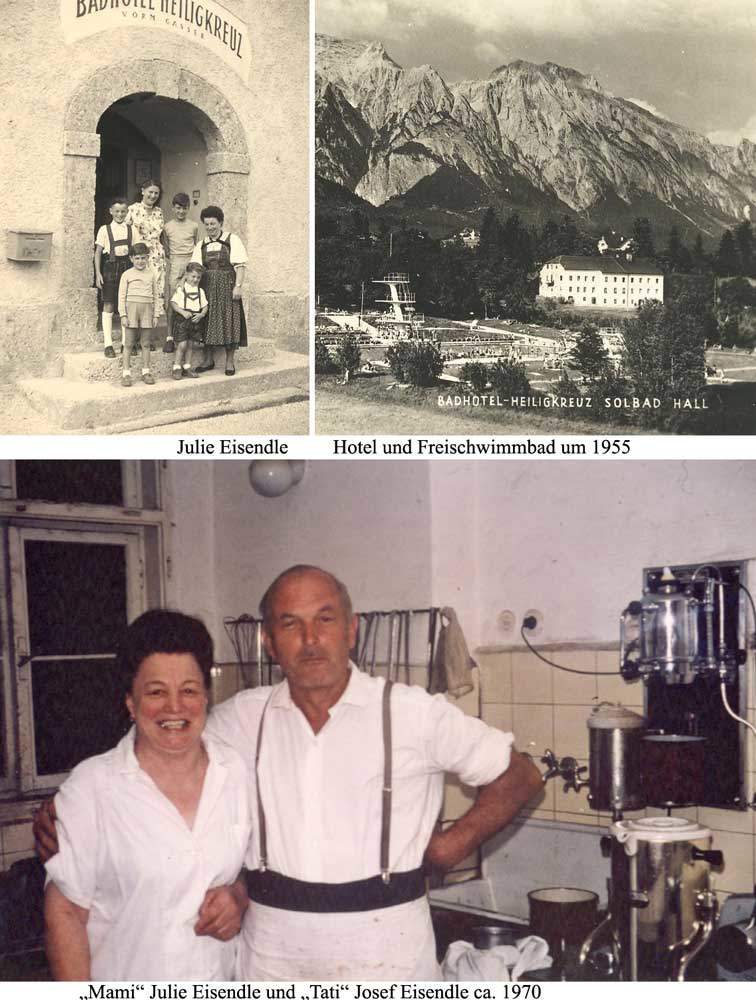 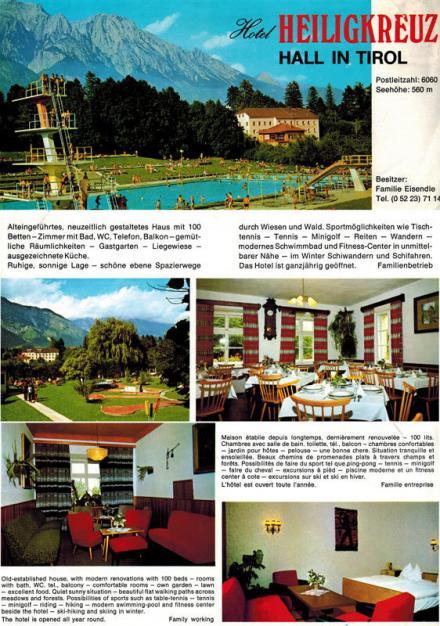 In 1968 a part of the western attic on the 3rd floor was extended – without insulation, with cold and warm water in the rooms, bathroom and toilets in the corridor. The rooms were for summer rent only. In February 1970 Helmut married his Brigitte, in February 71 Rainer was born, in February 72 Heidi. 1976 were installed in the 1st and 2nd floor in all guest rooms wet cells. Since only in the summer months guests came into the Inn valley, Helmut and Brigitte Eisendle rented the building from 1979 to 1985 in each case from October to May to the Expositur (alternative restaurant) of the Tiroler vocational school for catering trade. At that time there was only the catering school in Absam, which was bursting at the seams due to the tourism boom. In the summer months from May to October we managed the hotel ourselves.

turn of the millennium

In the 90s the rooms on the top floor were extended and the outer facade with the starry sky and the fountain at the entrance were erected. Since 1996 there is the address www.heiligkreuz.at and a guest computer with Internet connection in the hotel lobby. As one of the first hotels in the region, there has been a direct Internet connection in all rooms since 2002. After further conversions and renovations, the hotel was officially awarded 4 stars in May 2004. Beside the seminar room (2001) also a sauna (2005) was invested. 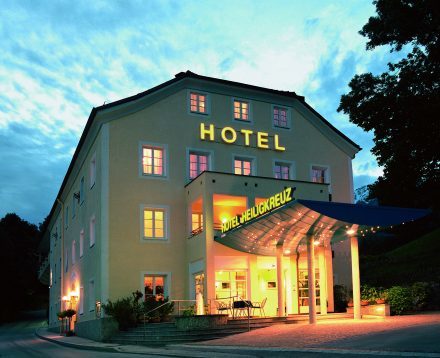 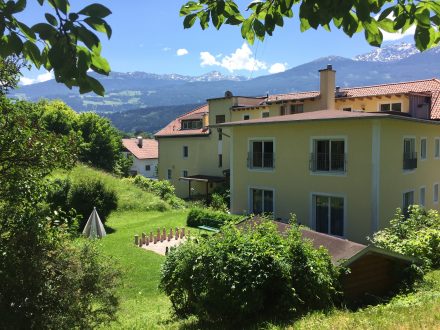 In spring 2008, in time for the European Football Championships in Innsbruck, the largest expansion and extension to date was completed. Eight rooms in the superior category and a junior suite with roof terrace offer a very high standard in the Hall region in Tyrol. As one of the first houses we are a checked, barrier-free hotel and offer two barrier-free rooms with own parking place.

The old plain tile roof of the house, which was well over 100 years old, was newly roofed in the winter of 2013/2014. On this occasion the insulation of the attic (30cm) and the dormers as well as all windows were renewed. Room 311 was rebuilt and is now twice as big as before. It can be booked by two adults with up to three children as a family room. In 2017 the last still “old” rooms 208 and 209 were renovated as superior rooms with air conditioning and balcony (another insider tip for your next stay).

We look forward to welcoming you as our guest.

One of the meditative springs at the hotel.